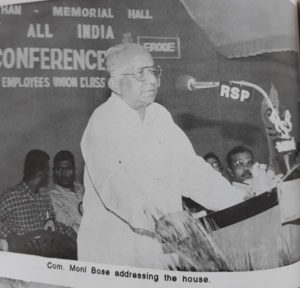 It will be 10 years on this 19th May, after Com.Moni Bose, veteran leader of telecom and P and T workers passed away. His life was full of struggles for the sake of workers and for the upliftment of the society. Though appointed in the Post and Telegraph Department as a clerk in the DET office Calcutta on 25th August 1945, he was terminated from service in connection with the 1949 strike of P and T workers. He was never reinstated. But he continued to work for the advancement of the workers and their organisation. Com. Moni is the younger brother of Com.K.G.Bose, the most loved leader of the Central and P and T workers.

He has served in many capacities in unions affiliated to NFPTE in West Bengal, including as Circle Secretary. He was elected as General Secretary of the All India Telecom Employees Union Class III in the 1991 Bhopal All India Conference defeating Com.O.P.Gupta, who was its General Secretary for long 37 years and who gradually shifted to the revisionist line supporting the government anti-worker policies. He led the struggle for the correct policies in the union. When BSNL Employees Union was formed in 2001, he was elected as one of the Patrons. Later he was appointed as a Member of the W.Bengal State govt employees’ Pay Commission. Co. Moni was a guide and teacher to the workers.